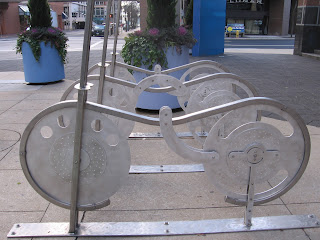 There’s no signage identifying the sculpture as a bike rack, but hopefully something will be installed soon. I don’t think it’s really evident on its own that it is a bike rack, and some cyclists might be wary of locking to something that looks like public art.
I think that artistic racks can really raise awareness about bicycling for transportation, but only if they’re functional enough to actually be used by cyclists. What do you think?
Posted by Mel at 2:19 PM 5 comments:
Email ThisBlogThis!Share to TwitterShare to FacebookShare to Pinterest
Labels: art, artistic, bike, bike parking, infrastructure, rack

Below are some pictures from a ride I just helped organize - The Bright Ride. Cincinnati has never really done a winter/holiday themed ride before, and my friend Margy had the idea of doing something where we would decorate our bikes with Christmas lights (like two-wheeled Christmas trees), and then ride around town spreading holiday cheer.


In hopes of being seen by as many people as possible, we timed the Bright Ride to coincide with another outdoor event - Light Up OTR. OTR (Over the Rhine) is one of the largest intact historic urban neighborhoods in the US. Like many urban-core communities, OTR has struggled a lot in the last few decades, with crime, violence, and poverty. But recently it's really started to feel like a vibrant, thriving neighborhood (tons of new shops, bars, restaurants, condos etc).

We saw lots of Light Up OTR volunteers as we rode around (they had about a thousand luminaries to distribute around the neighborhood business district), and the outdoor ice rink was open at Fountain Square too, so there were tons of people there that saw us ride past.

We had a great turnout, about 60 people, with lots of new faces, which was the best part of the whole evening. (I had expected that most of the folks who showed up would be regulars from the "Thursday Night Slow & Steady Ride", so I was happily surprised to see so many people that I didn't know.) Which I guess just goes to show that different types of rides can really bring out new riders. I think it really helped that we partnered with ArtsWave too (a local arts organization). They did a great job of publicizing the ride, and working with them gave us access to a whole new community of people who might otherwise have never known about the ride. 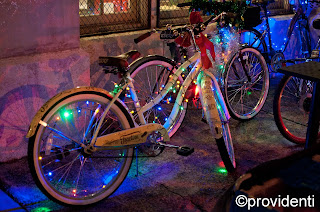 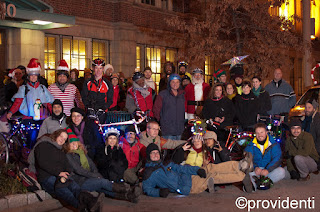 All in all, I think the ride was a huge success. Any time we get more new people on bikes, we’re growing our community. And now I’m feeling inspired to organize more themed rides next year! Any suggestions? So far we’ve done zombie rides, a tweed ride, and a bunny-on-a-bike ride.