The Coolest Thing You Never Heard About

This was my first year attending any of the Moshtrocity events so I don't know about past attendance, but it seemed like a really great turn out to me. There were eleven teams competing in the polo triathlon, which consisted of polo, foosball, flip-cup and mini-golf. This is only the second year that polo has been a part of Moshtrocity. The Cincinnati Recreation Commission built Cincinnati Hardcourt an official polo court last year, and Cincinnati is now one of only four cities in North America with an official, dedicated court. Which means hopefully we'll be hosting more and more tournaments here in the future. 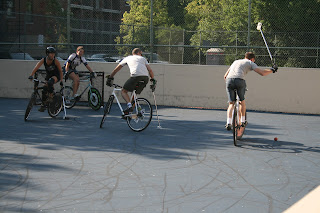 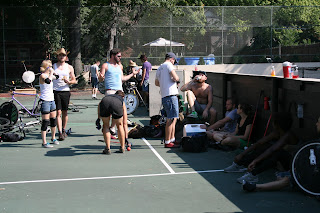 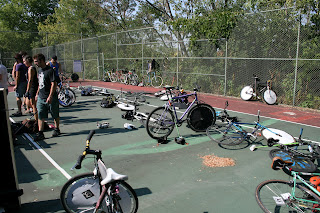 There were at least 70 people at the bike games saturday night when Bike Polo Guy and I left around midnight. In addition to Cincinnati folks, we had groups come in from Columbus, Cleveland, Lexington, Louisville, Chicago, and Nashville (including a pretty big contingent from Rat Patrol clubs). Seeing so many people there (including from out of town) really brought home how much our bicycle culture is growing. Pretty amazing.


I forgot to take a picture of the keg of espresso-flavored home-brew that may or may not have been sitting in the parking lot saturday night, but it was pretty awesome.
Posted by Mel at 6:01 PM No comments:
Email ThisBlogThis!Share to TwitterShare to FacebookShare to Pinterest
Labels: bicycle, bike, bike polo, Moshtrocity
Newer Posts Older Posts Home
Subscribe to: Posts (Atom)