Last week Cincinnati became the first city in Ohio to install green bike lanes. The bright (basically florescent) green color is being used to highlight conflict points where motorists must cross the bike lane in order to make a right turn or because they are coming off of a ramp. Research has shown that the bright coloring increases motorists' awareness of bicyclists at points where their paths cross. Cincinnati is starting with five green segments on Ludlow Avenue where it intersects with Spring Grove Ave, Old Ludlow Ave, Central Parkway, and the Cincinnati State driveway.

Green pavement has been used in a small number of cities nationwide, such as Chicago, New York, and DC. Some cities have used green pavement along the entire length of bike lanes,  some use green only in the intersections, and some use it only in the weave areas (like us). If you want more information on how colored pavement is being used elsewhere, NACTO’s Urban Bikeway Design Guide has a pretty good description.

In Cincinnati we are using green “thermoplastic” in our lanes, versus green paint. Thermosplastic is the material that is typically used in lane lines and stop bars, and it has a lifecycle of roughly 5-7 years. It comes in sheets, which are laid on the roadway and then torched so that the plastic melts onto the asphalt. We requested that the thermo be made retroreflective (so it’s visible in the dark), and we also had “skid-resistance” added  to the material (silica is added during production, and then again to the surface immediately before the material is torched). We’ll be looking for feedback from area bicyclists as to their experiences with the material in both wet and dry weather...

The installation of these lanes is a huge achievement for Cincinnati, in terms of the City Administration’s willingness to try something new. Hopefully it will lead to improved safety for cyclists as well. Studies in Austin showed that motorists were twice as likely to use a turn signal before crossing the green areas, and studies in Portland showed that motorists were significantly more likely to yield to cyclists when colored pavement was present. 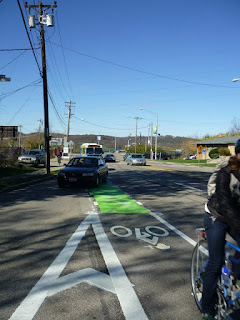 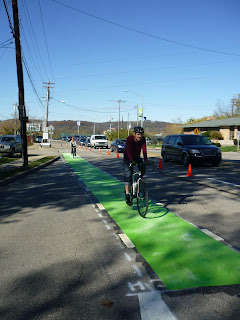