Last weekend I stopped in at the grand opening of Spun Bicycles in Northside. Spun is the 2nd new bike shop to open in the city within the last year (Reser Bicycle Outfitters opened their Over-the-Rhine location last June). Two new shops have opened recently out in the burbs as well: Freedom Gear Cyclery in Anderson, and a new Montgomery Cyclery location in Western Hills (down the street from Bicycles and More).

Both Reser OTR and Spun have kind of an urban focus which I think is really cool, and which I hope is indicative of real growth in the number of city residents using bicycles for transportation. The last few annual city surveys have always indicated that Cincinnatians use bicycles for recreation more often than they use them for transportation. But I think we're probably getting pretty close to the tipping point, which in my opinion makes us more of a well rounded cycling community.

As it turns out, trying to write about both shops in one post made for a really, really long post. So, this is going to be a two part post: Part I on Reser, and Part II on Spun. 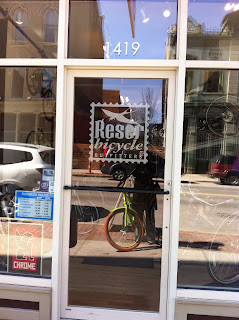 Reser Bicycle Outfitters OTR
Reser OTR's main brands are State (single speed, fixed gear bikes), Public (classic European city bikes/errand running bikes), and Orbea (flat bar road bikes), but they also sell Origin-8 and Torker. And they sell a lot of used bikes; in fact, half the bikes in their showroom are used! (And they offer used parts too!) Below are a few excerpts from a conversation with Store Manager Matt Baker.


Matt: We opened in OTR because of the population boom and resurgence of the whole OTR district. The population is growing up on top of itself, it’s becoming more densely populated; I think it’s one of the fastest growing urban cores in the country right now, and there was no bike shop. It seemed crazy in a city that’s this easy to ride around in, that there wouldn’t be a shop in the middle of it. So, we did that.

It’s an easy city to ride around in; it’s not the biggest city, the traffic is slow and there are lots of traffic lights, and as far as riding in the city goes, it’s safe. Though we’re not known for being a big cycling community, we will be soon. We’ve got all of these businesses moving into OTR and Downtown, and condos going in, and the developers in the area have done a great job with all the low income housing too, so we’ve got a super diverse, increasingly dense population of people who ride their bikes. 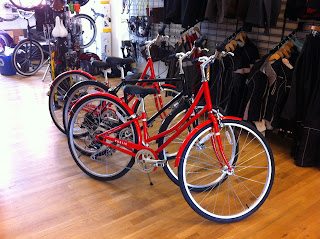 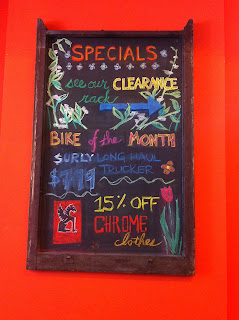 Matt: We’ve got a lot more options for city bikes, and bikes you can put racks and stuff on to run errands and go into Findlay Market, and get around town. And we have a huge selection of used bikes, and very urban accessories.

We don’t have any spandex. We have heavy duty overpants that are meant for keeping the pants they go over top of dry and clean in all weather. We have jackets that you can wear all day without looking like you’re about to go on a roadbike race.

We’ve got hardshell helmets. We’ve got a huge selection of locks that are great for Downtown, not just lightweight, cool looking locks, but stuff that is going to keep your bike from getting stolen – which is pretty important around here.

We carry bags and baskets and racks and backpacks that are built for taking a lot of abuse and being used on a daily basis. It’s not just that we’re in an urban center, we are urban-centered. Everything we have is meant for real heavy use, and being used by people that are going to be relying on their bikes everyday like it was a car. 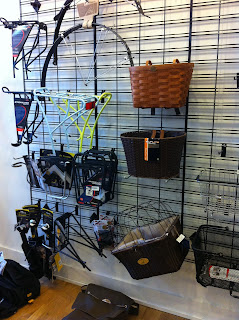