This is Part II of a post about Cincy’s two newest urban-oriented bike shops - Reser Bicycle Outfitters OTR and Spun Bicycles. Read more about Reser OTR in Part I. 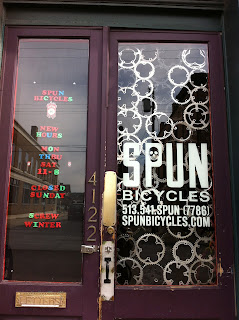 Spun is the brainchild of Judi and Dominic LoPresti, who are well known in the local bicycle community for their volunteer work and commitment to bicycle advocacy. Spun had their official grand opening last weekend, and so far they plan to carry Raleigh, Masi, Haro, Surly, Redline, and a bunch of BMX brands. In terms of price point, they plan to carry entry-level to mid-range bicycles, but Dom says he can get anything you want - just ask! He also mentioned that they plan to get close-outs of last year’s models when they can too, so that they can transfer those savings over to their customers.

Additionally, they carry a full line of Diamondback bikes for kids, starting at just $120. According to Dom, the Diamondbacks are a step up from what you could buy some place like Dick’s Sporting Goods, but these will last longer and are at a great price point.

Like Reser OTR, Spun is also selling used bikes, which I think is awesome. I know a lot of people who are interested in getting back into bicycling but are hesitant to make a larger investment until they know whether or not they’ll stick with it, or even what kind of bike they really want. Craigslist has some good bikes every once in awhile, but it just isn’t a great option for people new to bicycling unless they happen to have a bike-geek friend who can help them figure out whether what they’re seeing is a good quality bike in decent shape. So I’m really glad that Reser and Spun have decided to deal in used bikes, because I think it’s going to make purchasing a bike so much more accessible to so many people.

MM: Why did you open in Northside?

Judi: It's filling a niche for the residents in Northside, they need a bike shop here. Too many people ride bikes here for them not to have their own neighborhood bike shop. Everybody rides bikes. We're definitely catering to something that's been needed in the neighborhood for a long time. 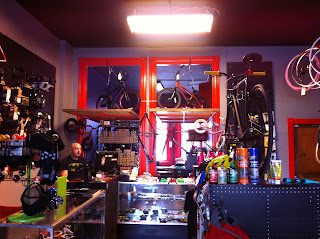 MM: What do you want people to know about Spun? What makes Spun unique?

Dominic: Spun Bicycles exists to make people enjoy the lifestyle of having bikes in their lives, and what it can do for them and the people around them. That’s really what it’s about; it’s not just a bike shop, it’s a place where people can come hang out and enjoy bike culture.

Judi: We created a bike shop where people can come, hang out, watch TV, drink a beer from next door...we wanted to make it a destination. We wanted to recreate that bike shop you remember as a kid, the one you never wanted to leave. We wanted to be a friendly shop. Approachable, less intimidating for the average bicyclist who isn't looking to get into racing. We wanted to carry affordable bikes, all under $1000.00, and cater to the neighborhoods needs. There are plenty of race shops in the city we can refer people too, but we won't be selling carbon fiber bikes. Dominic also wants to promote the sport of BMX and so we carry plenty of that as well. We'll be carrying skateboards this summer. 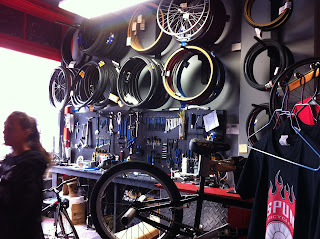 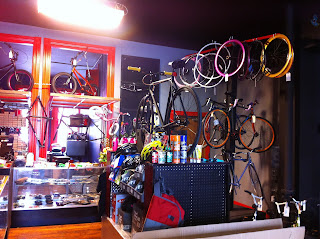 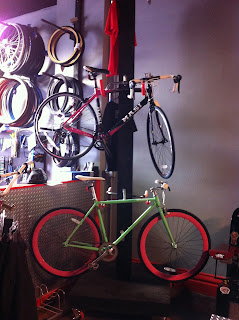 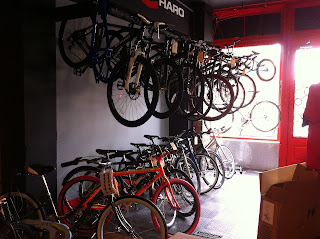 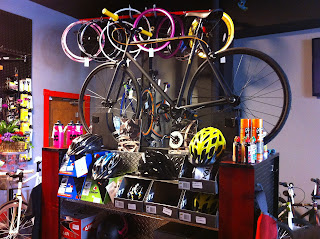 That’s it for Part II of New Bike Shops!