The Boyfriend and I recently spent a few days in Denver, and I had the opportunity to check out some of the in-street infrastructure in the Downtown area. We stayed with a friend who lives near the River North district, and we happened to be right on Stout Street - one of two parallel one-way streets with bike lanes that run in and out of Downtown.

In the residential area, Stout has two travel lanes, parking on both sides, and a bike lane running northeast. Look how huge the parking lane is - no worries about the door-zone here.

We used the parallel Champa Street to head southwest into Downtown. I was surprised that there was only one travel lane for cars, but I guess with the grid network there are several options for getting into Downtown.

It was so nice to be able to use a bike lane for the entire ride into Downtown. I'm guessing it's similar to using our new Central Parkway protected lanes between University Heights and OTR - so relaxing to not worry about keeping up with traffic!

We also happened to have a B-cycle bike share station just a few blocks from the house, so we were able to use bikes for most of our trips Downtown. The system was very easy to use (just swiped our credit card on the spot), and I think we only went over the 30-minute free time limit once. Cincinnati is installing a similar system (Red Bike) this fall.

We saw green thermo a couple of places, and it appeared that Denver is using it pretty much the same way Cincy is - to highlight areas of conflict where cars may be crossing over the bike lane. One difference though, they used the "piano key" design at intersections, versus the solid swath that we've been using. The green thermo is expensive, so I'm guessing doing the piano keys saves money (less green). They may also provide better traction for motorcycles (the thermo tends to be slick when wet, even though sand is usually added during installation).

It was also cool to see that Denver had designed some of their transit stops just like we designed the bus stops south of Liberty Street for the Central Parkway protected bike lanes. The bus pulls up to the left of the island, and the bike lane stays to the right - so buses never merge into the bike lane. Denver used some extra pavement markings, but same basic idea.

I liked this extra detail for people getting on and off the bus and walking across the bike lane.

Chicago does something similar at their crosswalks that intersect protected bike lanes.

I also saw this cool, custom sign in front of a parking garage entrance. I think we're going to be installing the same thing (fingers crossed, I'm still lobbying) at a few places along Central Parkway (like Linn Street).

And last but not least, I was able to check out a bit of Denver's brand new protected bike lane that was just installed this past June. The piece that I saw was on a one-way street (15th St). It looked very similar to our new protected lanes, except that they used a brick color to highlight the buffer area where the pylons are, versus the diagonal stripes that we used.

Because it was a one-way street with the bike lane on the left side, they also had this cool "right-turn box" for folks who want to turn right onto Lawrence but don't want to merge into motor vehicle traffic. To use the box, you steer left out of the protected lane into the turn box, which happens to put you at the top of the bike lane on Lawrence, then you wait for that signal to turn green, then go straight on Lawrence across 15th, and voila you've made a right-turn! Many cities do something similar (called the Copenhagen Left) to help cyclists make a left-turn without merging into traffic.

All in all, I was very impressed with the number and quality of bike lanes that we encountered throughout Downtown and the surrounding areas. It seemed like almost every other street had a bike lane on it, and we could use a combination of bike lanes and residential streets to get most places we wanted to go. And I felt very safe traveling by bike, even on the streets with no lanes.

That's it! I had great trip, and it's always fun to see what other cities are doing and how we compare.

Last weekend Cincinnati had it's first "Open Streets" event - Cincy Summer Streets. Open Streets is a national movement that temporarily closes streets to car traffic for a few hours on a weekend, and opens them up for people to run, bike, walk, and play. The concept is believed to have begun in Bogota (they call it ciclovia), where they close down 70+ miles of streets to cars every sunday. There are now over 100 open streets events taking place every summer in the US.

Planning for our first event began in April of 2013, and we had no idea what we were getting ourselves into. It was an incredible amount of work. And none of it would have happened without my co-conspirators Anne Sesler and Margy Waller, and the generous support of the Haile Foundation and Interact for Health. 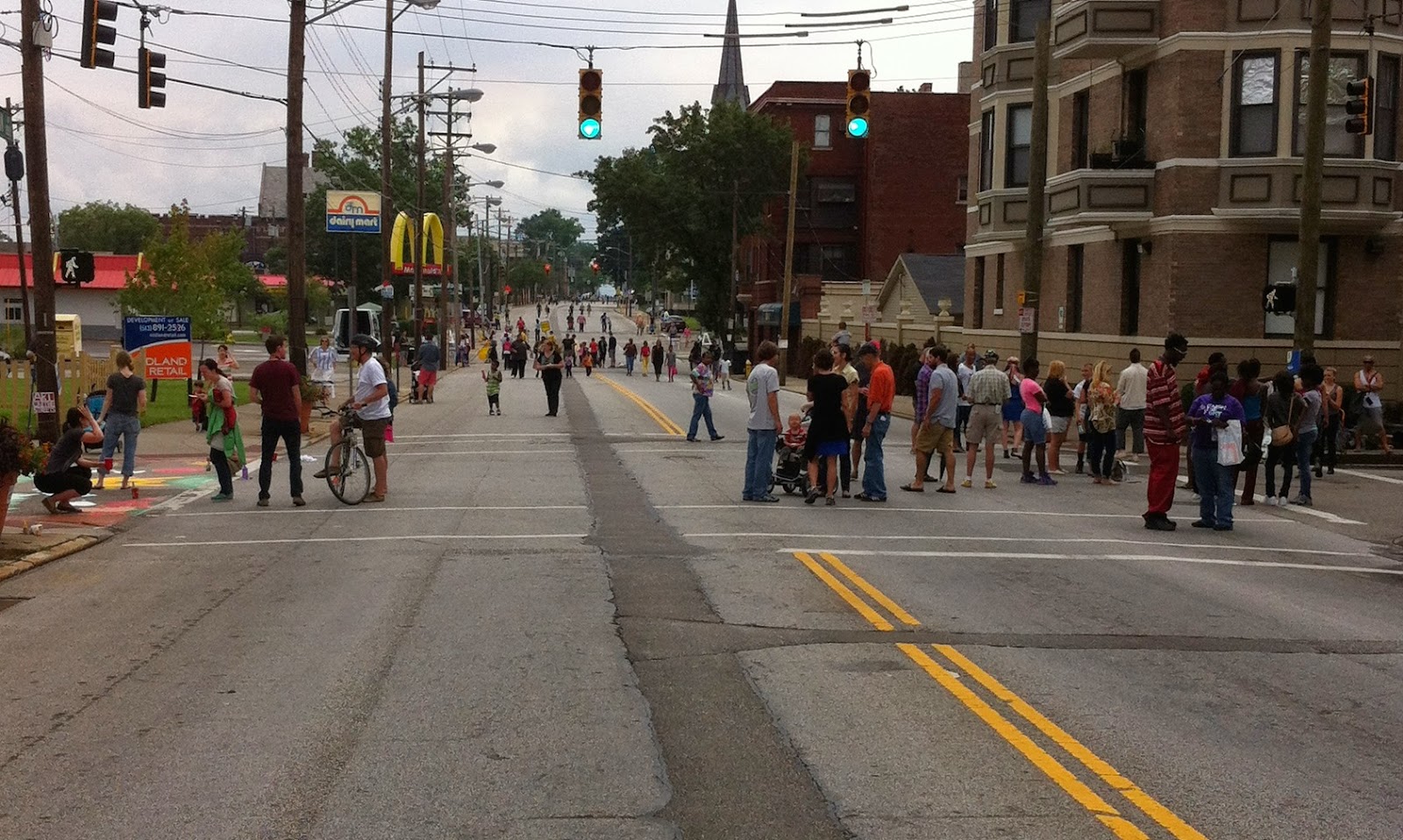 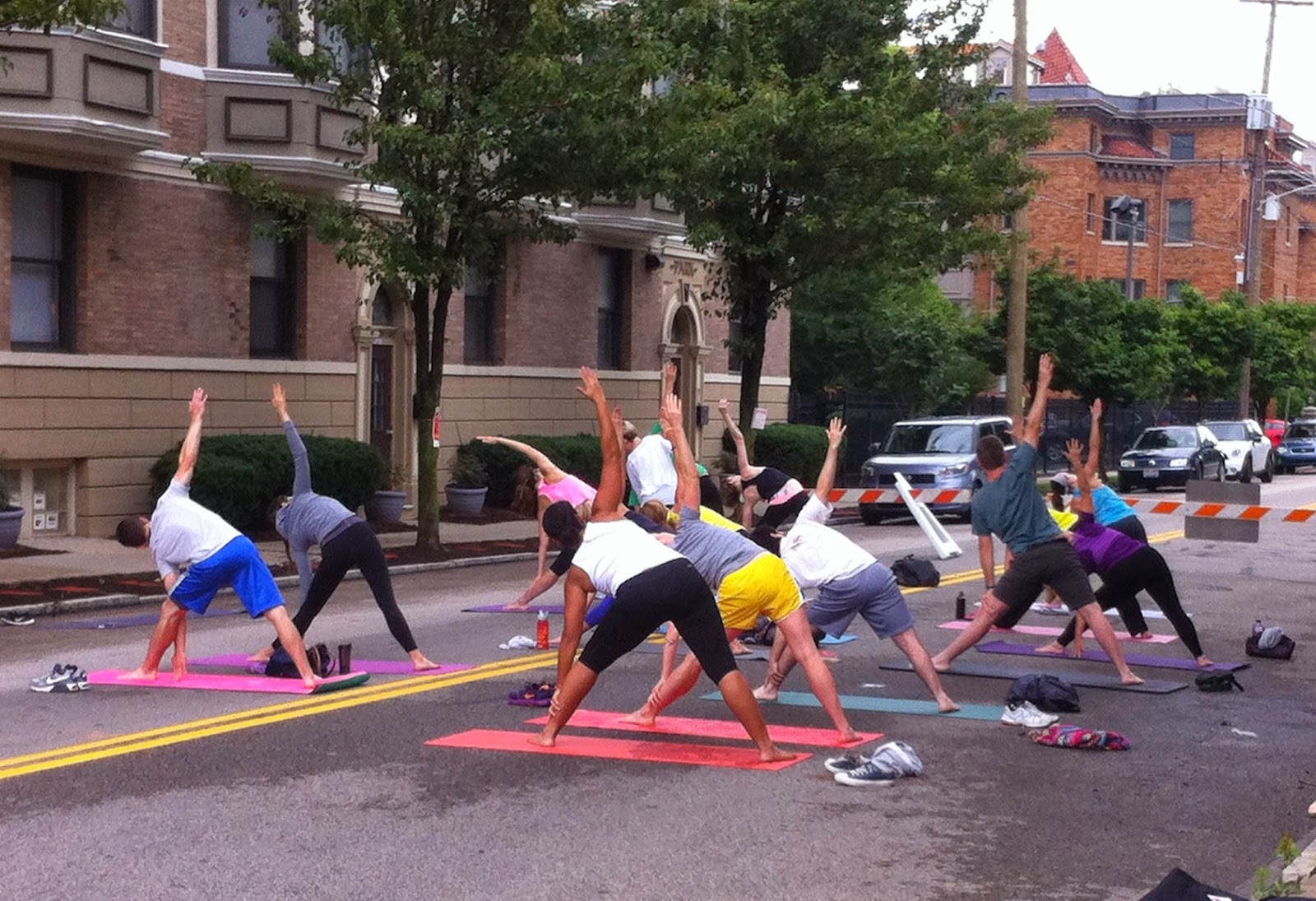 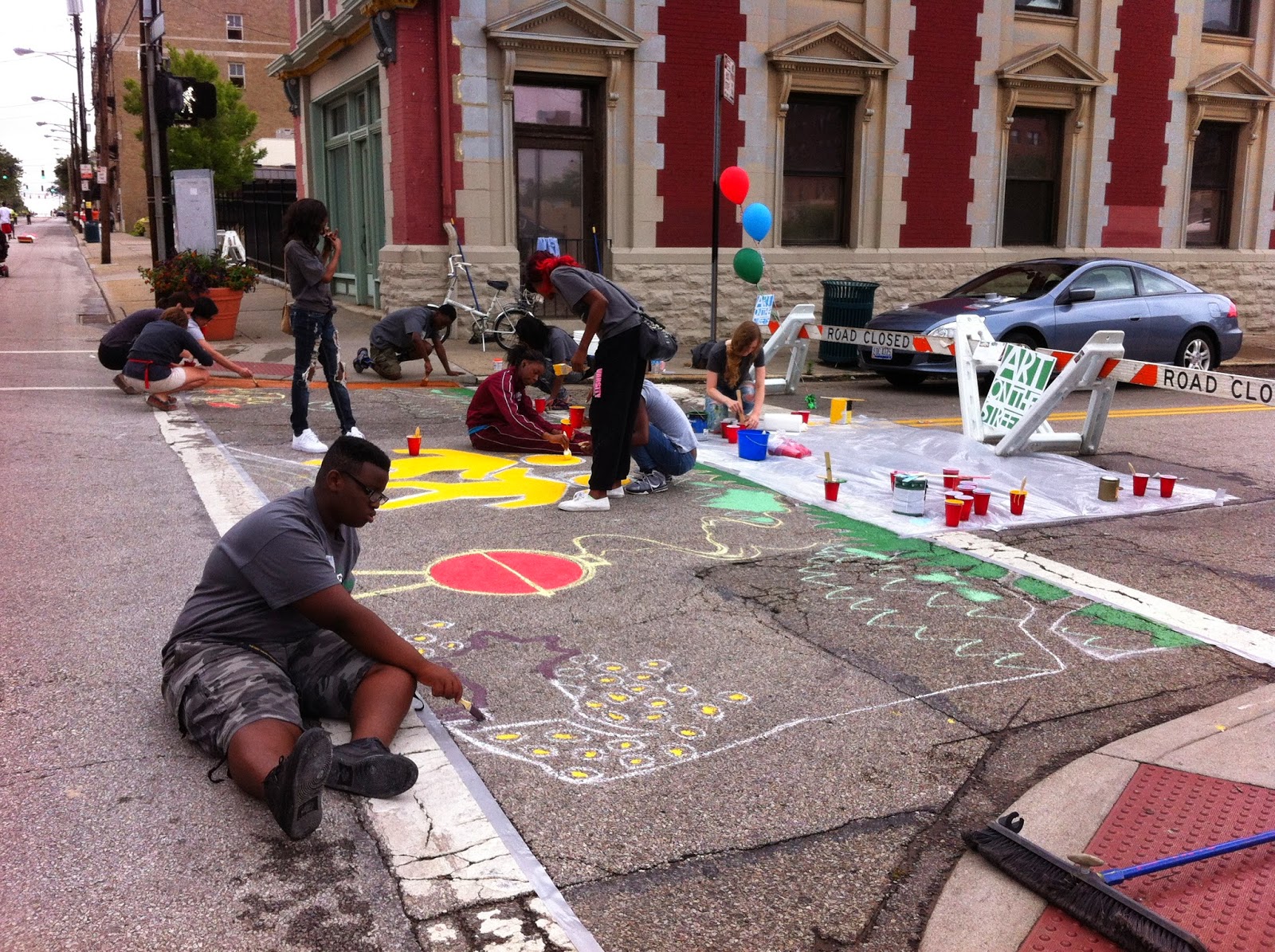 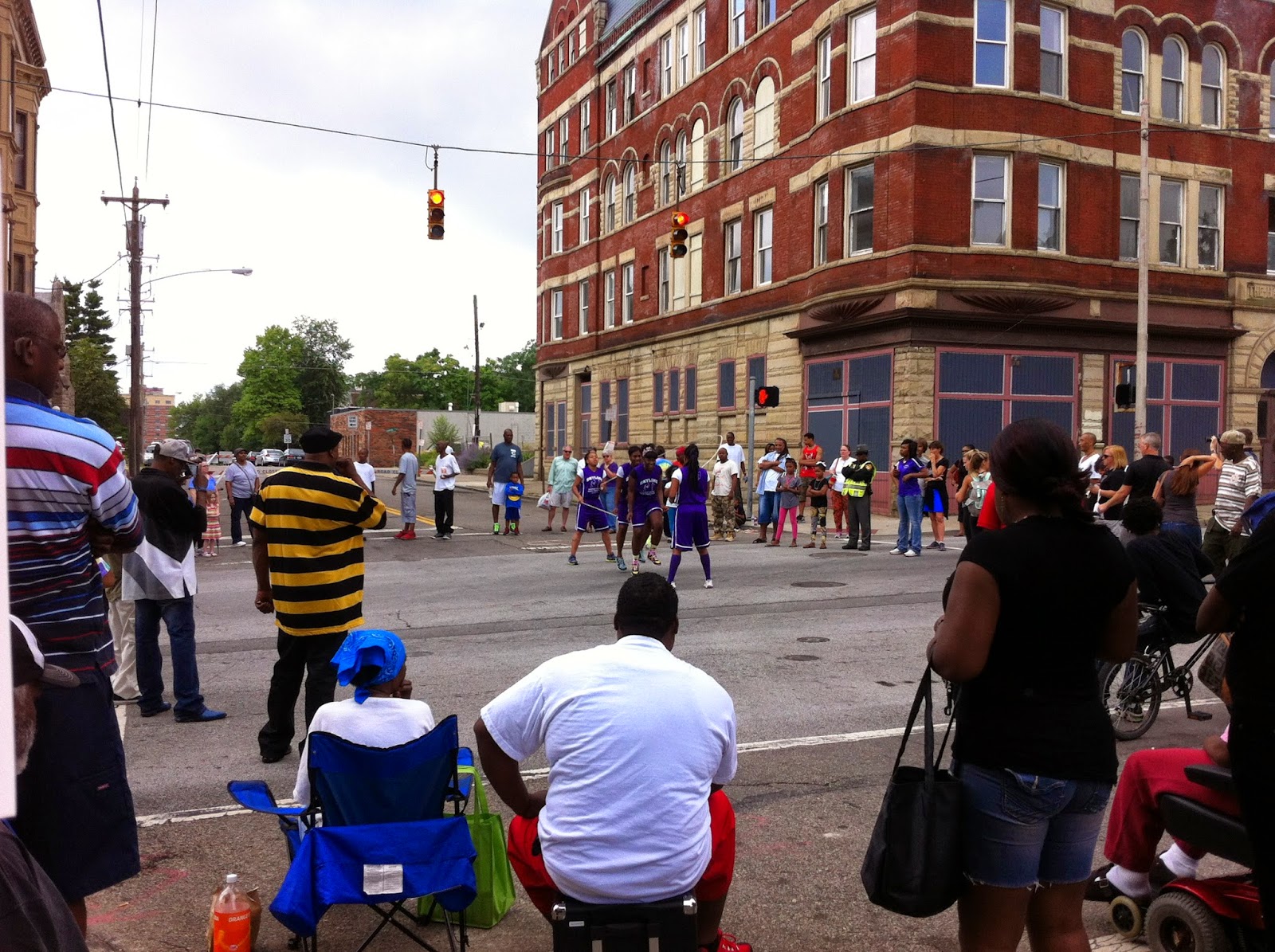 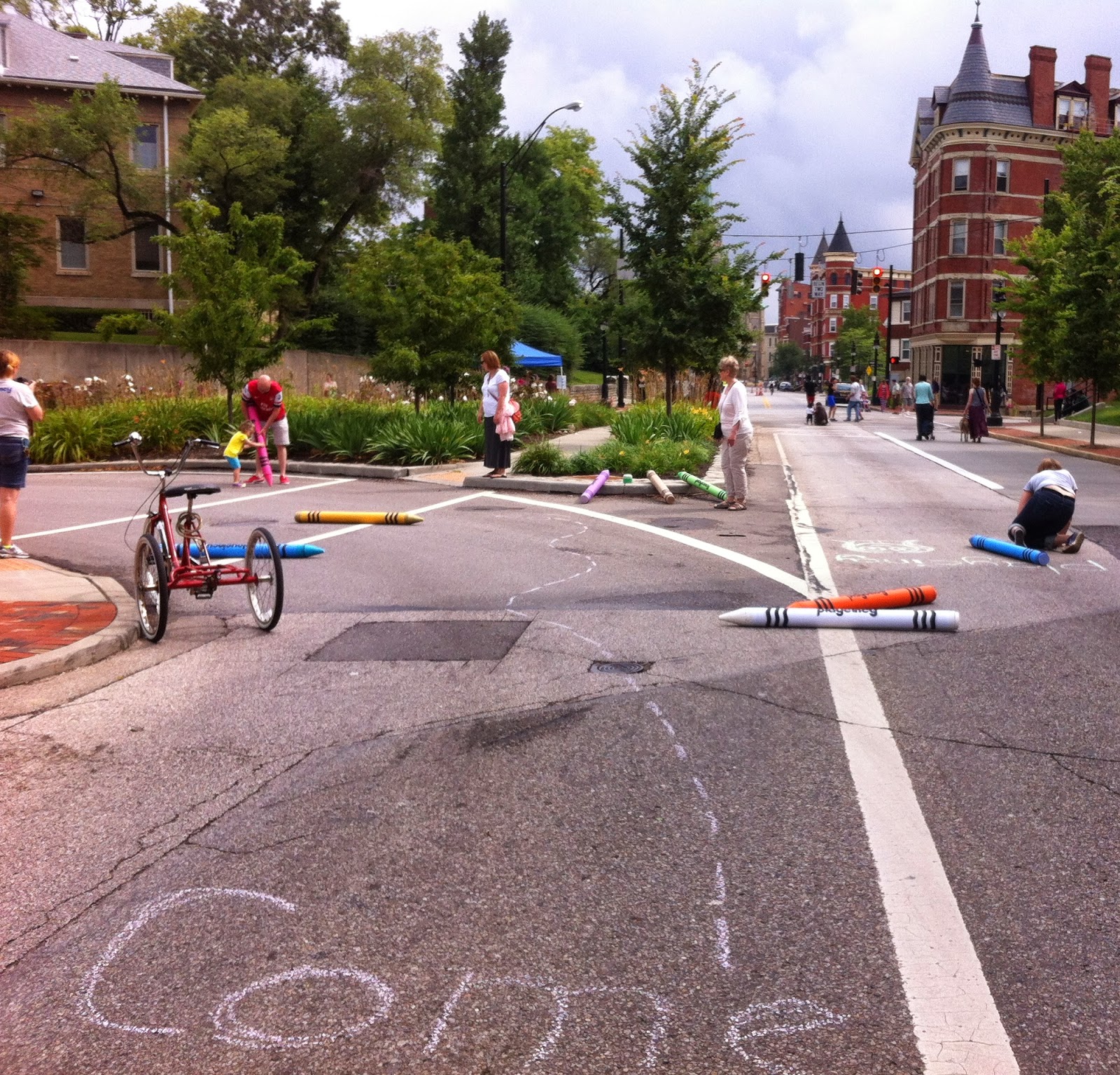 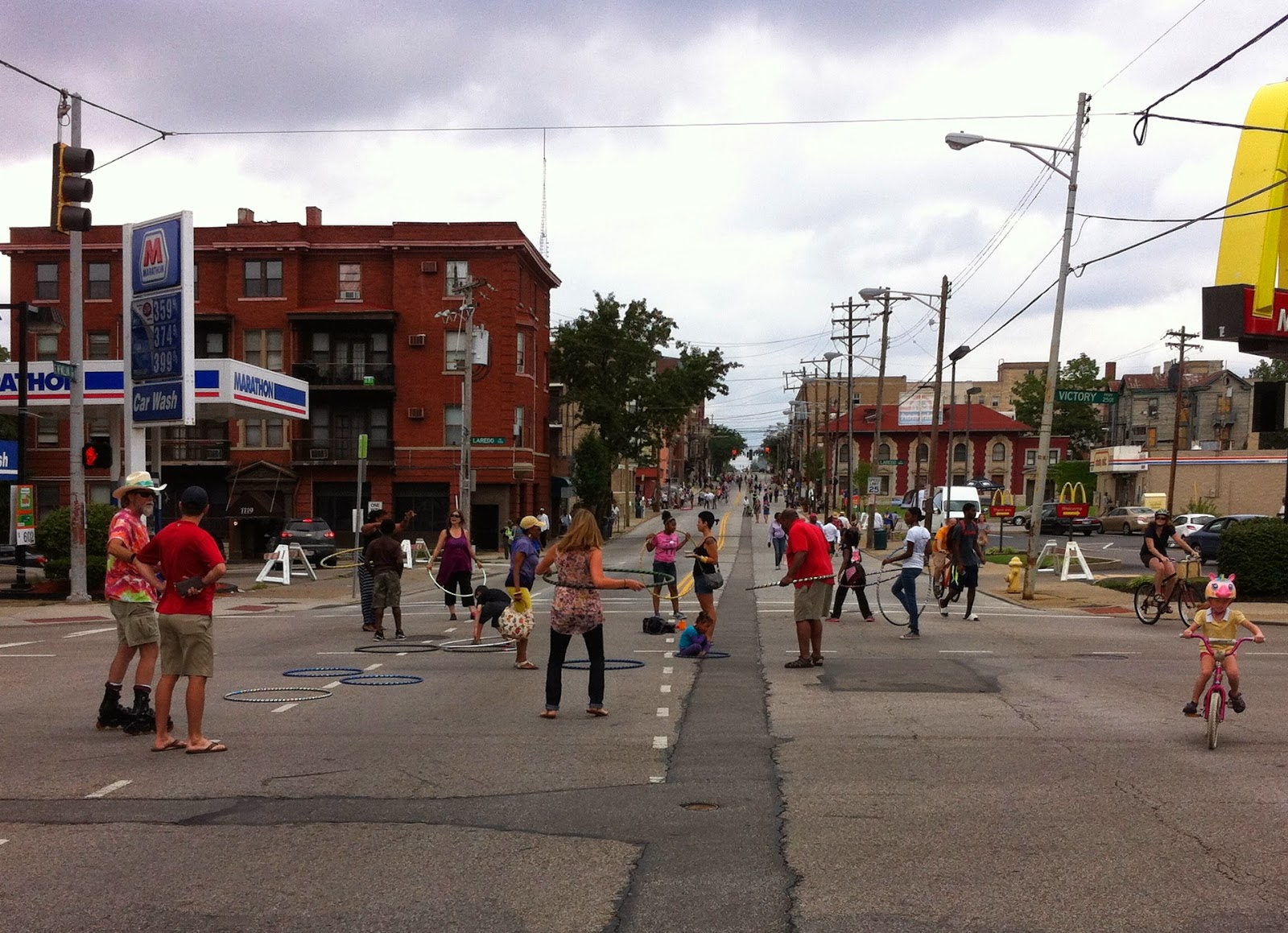 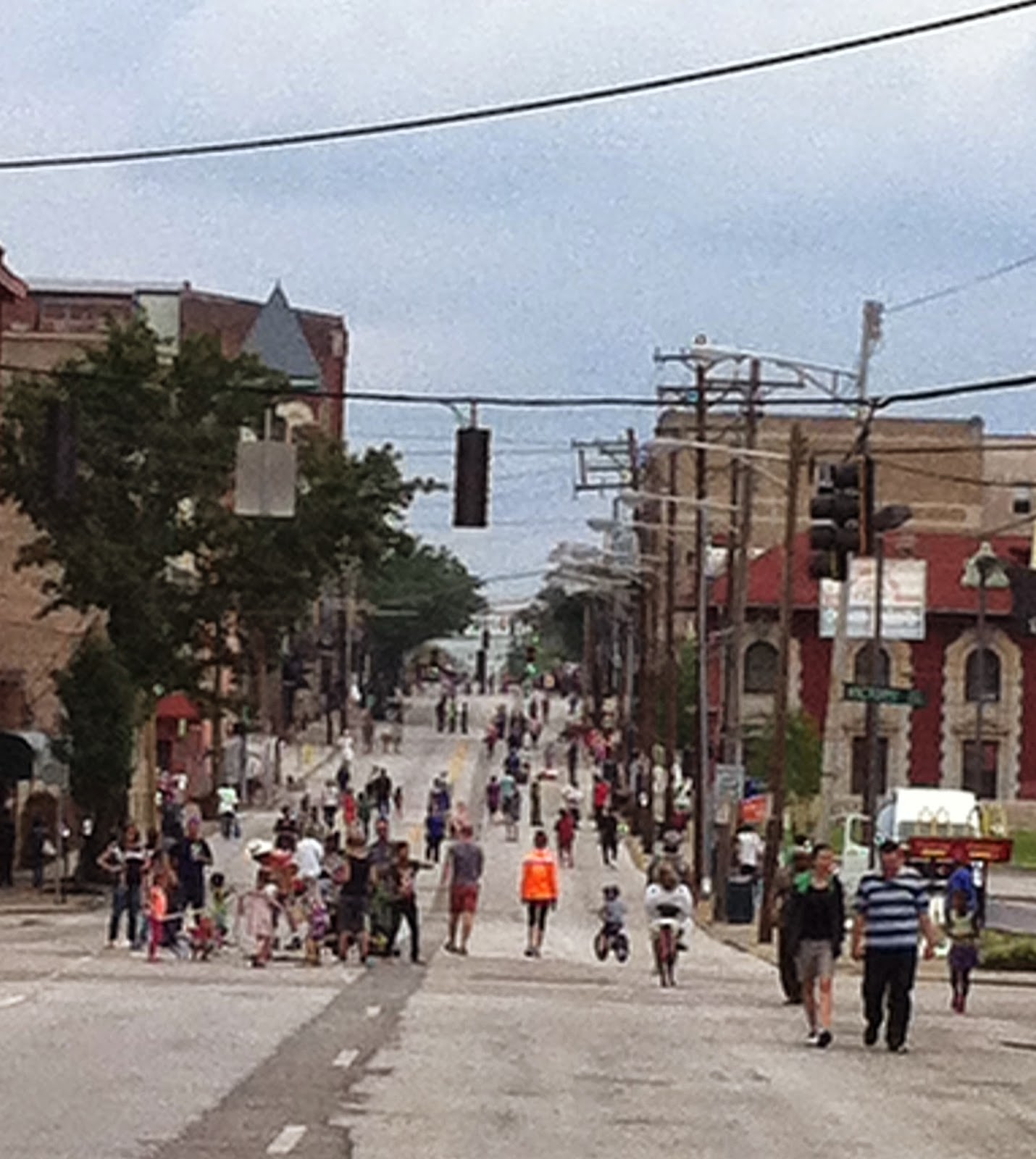 It was incredible.  I drive those streets all the time, but I have never seen them so vibrant and full of life. Hundreds of people, young and old, black and white, walking, riding bicycles, pushing strollers, talking, dancing, it was a beautiful sight.

Our next event will take place in Northside on August 24th. Be there.

This past thursday was the first ever Cincinnati Bike Show, hosted by the UC Bike Kitchen, part of the University of Cincinnati's Office of Sustainability. The public was invited to bring bikes of all types to be displayed, and then we all voted for prize winners in categories like: gnarliest bike, best vintage bike, best custom/specialty bike, fastest looking bike, most comfortable looking bike, best bike name etc.

It was great to see so many new faces in the crowd, as well as so many awesome bikes. 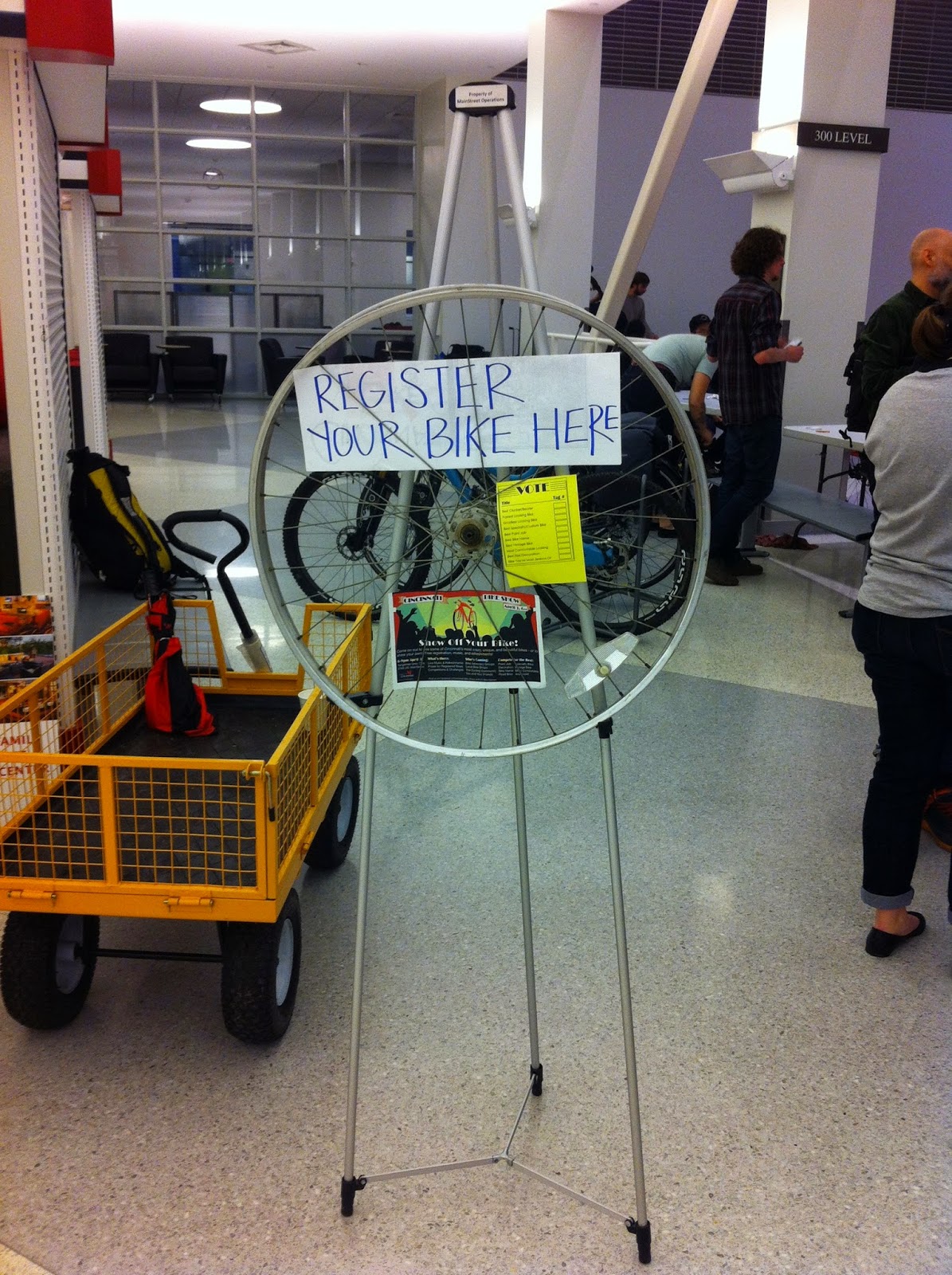 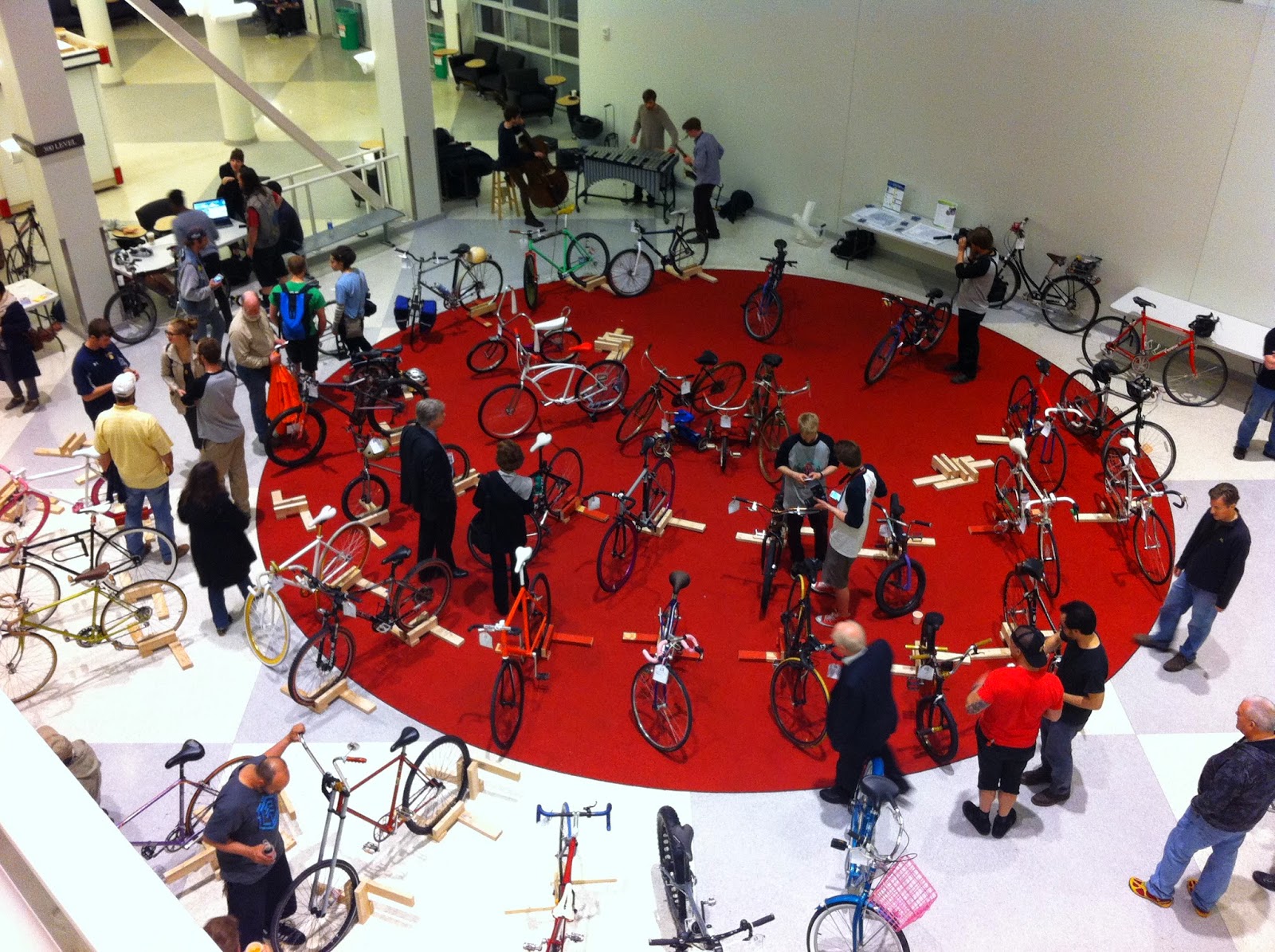 I drive past the School for Creative and Performing Arts everyday on my way to work, and a few days ago I noticed this colorful new sculpture out front. Of course my first thought was, "I bet you could lock a bike to that!" I went over today to investigate, and after accosting some high school students I learned that it is indeed a bike rack! I'm assuming it's an ArtWorks ArtRack, but no plaque has been installed yet so I can't be sure. Each of the six tentacles has a unique colored icon at the top: a sun, a molecule, a heart, an apple, a moon, and a brain. It'll be interesting to learn the meaning behind the symbols.

I didn't have a bike with me to try it out, but it appears that the holes in the tentacles are varied enough in size and location that the rack should be easily usable with either a U-lock or a cable lock on any type of bicycle frame. I can't wait to see it filled up with bikes this spring! 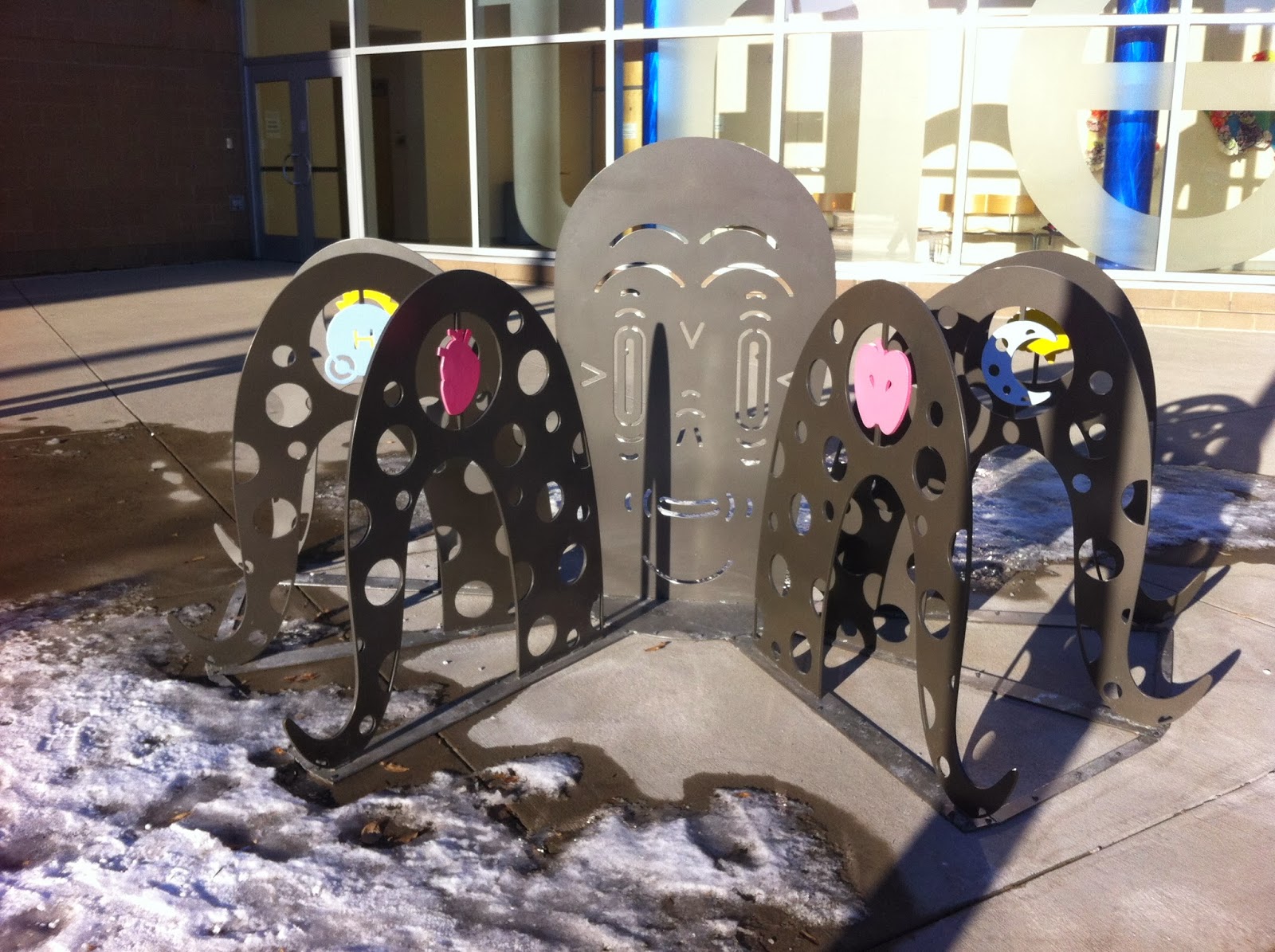