I was doing a photo shoot for our local bike share system the other day and surprised the other cyclists by rolling my bike up the runnel next to a giant staircase in Smale Riverfront Park. Of the eight people I was with, only one of them knew what the bike runnel was for. This was a great reminder of how difficult it is to educate the community about the different types of bike infrastructure. So I decided to do my part and write blog posts on bike runnels and loop detectors.

A bike runnel is a smooth u-shaped guideway adjacent to a staircase that allows cyclists to roll their bikes up and down as opposed to having to lift and carry them. Cincinnati has included bike runnels in many of our public stairways, most recently at Smale Park and the Liberty Hill Steps. 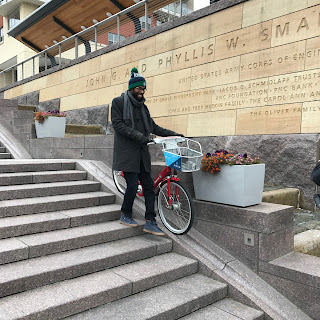 Just guide your bike wheels into the groove and push it up, or squeeze your brakes and roll it down.
Posted by Mel at 7:00 PM 3 comments:
Email ThisBlogThis!Share to TwitterShare to FacebookShare to Pinterest
Labels: bicycle, bike, Cincinnati, infrastructure, runnel 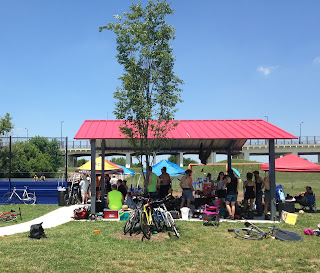